I lost Paco last year on May the 16th. I have not been able to visit this page until now - I miss my little buddy so much!

I am still stitching - my current piece is down to back stitching and beads - let the fun BEGIN!

I also have a new granddaughter - Ana B. or as I call her "Critter".  She is 10 months old and lights up my world.

Hope everyone is having a great summer!
Posted by Amy W. at 3:03 PM No comments:

June bugs have been eating on my rose bushes.....I'm hoping they will be moving along soon.....

On Memorial Day a copperhead snake decided to make an appearance in our garage and he was swiflty decapitated by my husband. Sad part is, every time I walk out the door, I look to make sure there is not another one out there!

Uploading my June ORT jar photo - I'm a little behind, as usual..... 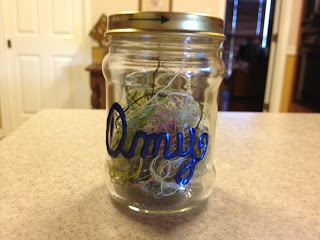 I have just started a new project....trying to catch up on making some Christmas gifts.

Paco is doing well - he's been coughing a little more but I think it is some weed pollens that are coming out. Otherwise, he is doing good and keeping Mayfield Kitty on his toes!

Hope everyone has a great week!

And The Stitch Goes On!

Posting my May photo for The TUSAL! My jar contains all the leftovers from finishing my last project! 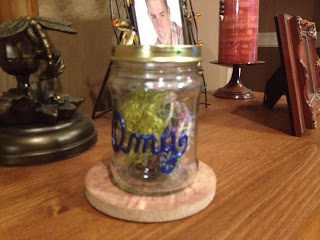 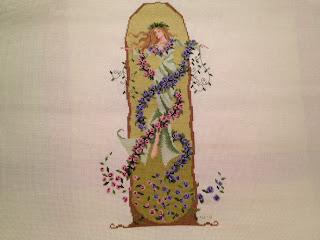 Hoping that the next few days brings some relief from the pollen - good grief the last couple of days have been HELL!

Since this is Paco's place, I have to mention that he is still doing good, knock on wood! He is beating the odds with little dogs that have heart disease. He did get a big scare yesterday from the thunder....he never had a fear of it in the past but it must be coming as he ages.

And a great big HAPPY BIRTHDAY to my son, Dustin. He turned 20 years old today - we are so proud of him!

Hope everyone is off to a Great Week!

March brings a little more thread in the jar - yay! Project coming along nicely.....crossing fingers that I can finish it soon!

All the critters in the house are doing good - Paco's coughing is down some which is GREAT! After promptly giving myself a mini computer virus on Tuesday, I forgot to post my photo once it was all straightened out!
So here goes...... 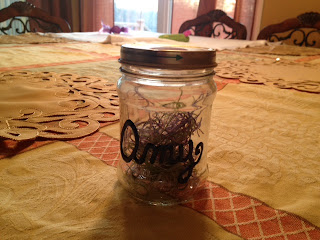 I have been making good progress on my latest project.....
On another note, we have removed our french doors in the foyer - FINALLY!
We will be switching out the doorways to be plain and I'm going to  put a side curtain on each opening. I'm excited!
Mayfield Kitty keeps going to the door but says it is too cold to go out.....he must've learned a lesson for staying out all night last night - he has slept all day. 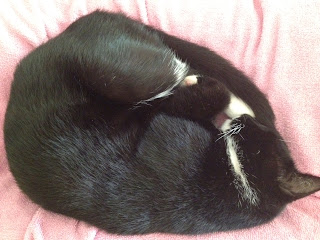 He is a little angel when he wants to be!

Hope everyone has a great week!

First photo coming right up. Although the jar looks skimpy, I have actually been a busy bee! Some of my leftover threads went straight to the trash! I promise to do better...... 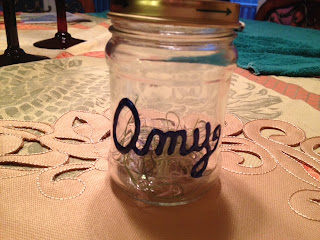 January 2011
Here is an updated photo of my current work in progress! 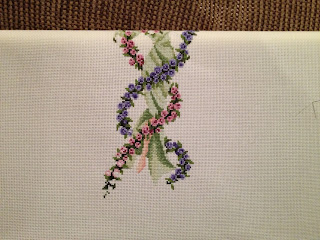 ﻿
I'm really liking the colors in this one!
The monsoon ended today so I'm hoping for prettier weather this week!
Michael & I tried out the Kinect this evening - loads of fun and we both concluded that we need to be more active on a more regular basis!
Since this is Paco's Place - I can't leave without mentioning the little stinker - he is still hanging tough!
Hope everyone has a wonderful week!
﻿
Posted by Amy W. at 8:20 PM No comments:

The end of 2011 left my family with much sadness. We lost a very dear uncle, Billy, to cancer just after Thanksgiving and his sweet family has had such a struggle over his passing.Just before Christmas, my daughter and son-in-law lost one of their dogs (they had two 1 year old huskies - brothers from the same litter) due to a horrible accident. 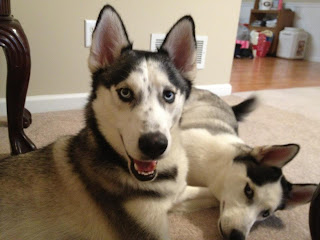 Rest in Peace, Harper - you were such a Good Boy!

In the middle of it all, Paco began to have spells - not sure if they are seizures or his body trying to pass out from lack of oxygen due to spurts of increased activity......they have been few and far between, thank goodness. I know with his condition he can't last forever but it's heartbreaking to see him have these spells. He is still Momma's Boy! Paco with a chewy

I've been stitching a new project - yay for me and coming right along with it! 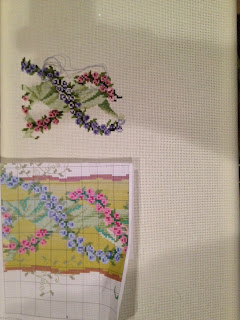 Hoping I can keep moving along with it and finish it up in the next couple of weeks - I'll post a new photo as I progress.